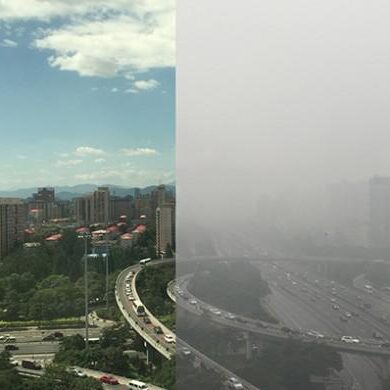 Earlier this week, CNN, BBC and other reliable news outlets reported unintended benefits of the coronavirus lockdown. China’s coronavirus quarantine likely saved the lives of 50,000-75,000 people who would have died from air pollution.

Marshall Burke, a researcher at Stanford University’s Department of Earth Science, calculates that that the two months of cleaner air resulting from China’s coronavirus restrictions has saved the lives of between 1,400 and 4,000 children under 5, and 51,700 to 73,000 adults over 70 in China.

Let’s look at that for a second. As of today’s coronavirus statistics, for every one person in China who died from the virus, 20 people have been saved from pollution-related deaths!

NASA and the European Space Agency operate pollution-monitoring satellites.  When the Chinese quarantine went into effect in February, scientists observed drastic decreases in air pollution over China. The satellites measured concentrations of nitrogen dioxide, which is released by cars, power plants and industrial facilities, from Jan. 1 to Jan. 20 and again from Feb. 10 to Feb. 25. The contrast was dramatic.

Italy’s near shutdown of cruise and cargo ship traffic in Venice has resulted in cleaner, clearer water in the canals. Like China, Italy also saw a dramatic decrease in pollution when Italy’s prime minister announced a nation-wide quarantine lock-down.

Shelter-in-place measures are impacting pollution in the US as well. Comparing fine particular matter – tiny particles in the air that are dangerous when breathed into the lungs – to the same week last year, San Francisco is experiencing a 40 percent reduction, New York City dropped 28 percent and Seattle decreased by 32 percent.

“Does this mean pandemics are good for health? No,” says Burke. “Instead it means that the way our economies operate absent pandemics has massive hidden health costs, and it takes a pandemic to help see that.”

One of the most poignant characteristics of human beings is our ability to adapt.

An unfortunate side-effect of adaptability is the fact that we accept the unacceptable because it is considered “normal”.

According to the World Health Organization, ambient air pollution kills and estimated 4.2 million people every year. When did this become normal? Can we continue to consider it acceptable?

BreatheLife Campaign is a global initiative led by the World Health Organization (WHO) and the Climate & Clean Air Coalition (CCAC) to mobilize cities and individuals to protect our health and planet from the effects of air pollution.  Maybe this pandemic will shine light on the pollution epidemic, inciting people to put pressure on governments for stricter emissions controls. And maybe cleaning up smog will allow us to see the corona cloud’s silver lining.